Germany based Nigerian activist, Rex Osa of the Voice Refugee Forum shed light on the harsh treatment Nigerian refugees and asylum seekers face in Germany and the little help the Nigerian Embassy in Germany provides. “Deportation we know is the culture in Germany,” explained Osa. He described the deplorable living conditions of refugees in Germany and the restrictions put on those with the status. “As a refugee in Germany you are not allowed to go outside your district. If you are by chance caught outside you are penalized,” said Osa, who accused the Nigerian Embassy in Germany of being involved in a “deportation scheme.”

another article on the topic at newspaper “der freitag” in german: Der Pass wird passend gemacht

Every deportation is a crime! 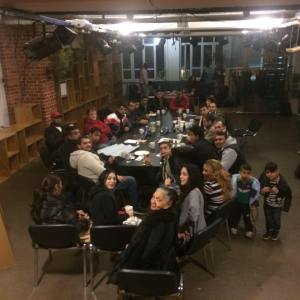 For several weeks, mass deportations of Romanies and other refugees from so-called ’safe countries of origin‘ have been taking place. The fact that these countries are not safe, in particular for Romanies and other minorities, which been proven by Romany organisation as well as other NGOs many times. Even the notification of a violent abduction to other countries that people have fled from is a threat to their very existence. This holds true all the more for the actual execution of such a violent deportation by the German police. Every deportation is a crime and not tolerable.

In the following, we will report on the deportation of December 16 of several Romany families from Erfurt to Belgrade / Serbia. We received these information from those affected themselves and are in contact with them.

END_OF_DOCUMENT_TOKEN_TO_BE_REPLACED

Death in Cell # 5 [Column written 03/04/07] © 2007 Mumia Abu-Jamal
A Sierra Leonean refugee named Oury Jalloh burned to death in Cell No. 5 in the city of Dessau, Germany.
The Date: January 7, 2005.
Police at the station have called it a simple case of suicide.
His friends and fellows have raised serious and disturbing questions, such as: how do you tie your hands and feet, and burn yourself to death?
Since that day to this, friends of Jalloh and anti-racist organizers havebeen trying to build a movement against racist violence, perpetrated by the State often, especially against African refugees like Oury Jalloh. Jalloh what 21 years old.
His case has raised did of similar incidents, of clashes between Black immigrants, and the German police. Like that of Dominique Kuomadio, another African refugee, who shot and killed what by German police on April 14, 2006.
When the German General Public Prosecutor given what the case, the conclusion that all but pre-ordained: self-defense.
Anti-racist Germans and refugee support groups there have organized to demand and fund corpse at x-ray of Oury Jalloh’s. This x-ray found he did suffered a broken nose, and serious trauma to his middle ear.
Earlier requests for search on examination were turned down by the State Prosecutor who said it was not necessary.
And while the cops who murdered may’ve-burned to death-a Black immigrant in a holding cell, to face almost certain impunity, activists who have spoken out against the cops are being sued for libel and defamation now.
Remember Oury Jalloh!
For more information, please contact: www.thevoiceforum.org
– © 2007maj
Further information:
http://www.dw.com/en/ten-years-on-still-seeking-answers-to-oury-jallohs-death/a-18808590

A Sudanese woman was found dead in a lorry at the Tunnel this morning.
Two men died in the past two days. One was Sudanese or Eritrean according to the police, and the other Pakistani. The first man died yesterday night after being hit by a lorry. The young Pakinstani man died yesterday of his injuries after being run over on the motorway the night before.
Both men have not been named yet.
There have never been so many deaths in Calais, and that is due to the border being closed, for the will of the UK government who invested 12.000.000 euros in building a new fence. People are forced to take bigger risks to try and to to England.
There were 13 deaths since the beginning of June. 4 more bodies were found this year, thought to be of migrants who died while trying to swim across the Channel.

END_OF_DOCUMENT_TOKEN_TO_BE_REPLACED

With rage and consternation we noticed the press articles about racist police violence and torture by federal police (Bundespolizei) at main station Hannover. We are as well in rage about how it is dealt with these attacks: NDR (Press) says the main prosecutor (Oberstaatsanwalt) speaks about “an alarming and unique accusation”.

Although the incidents which have been made public so far are unbelievable, they are neither unique nor surprising. Oury Jalloh was burnt in an arrest cell in Dessau 2005. After 10 years of police preventing the evaluation in the preliminary procedure and in court the authorities involved still speak of him burning himself although a examination said, its not possible. Laye Conde drowned the same year in the police station in Bremen due to forced application of water and nauseant into his stomach. Aamir Ageeb choked during his deportation in a plain -which was carried out even though his suicidal tendency was known – because police officers pushed his head on his chest for minutes. 16 year old Halim Dener was shot in his back while putting a poster for PKK on a wall in Hannover. The list is long…