Transnational meeting in Ljubljana against the militarization of Slovenian borders

Fronta brez Meja, Anti-Racist Front Without Borders is organizing a manifestation in Ljubljana on Saturday 31 of October, 11am in Tovarna Rog, Trubarjeva 72 and calling everyone to participate in a transnational meeting and manifestation against the militarization of Slovenian borders and the attempts of the EU to break the movement of refugees and migrants.

END_OF_DOCUMENT_TOKEN_TO_BE_REPLACED

This is not a joke, “overcome borders” is this year’s official moto of the German Unity Day (Tag der Deutschen Einheit) – celebrated on 2nd, 3rd and 4th of October. For 3 days, they will party around the fall of the wall and the end of the inside border (1989 & 1990), forgetting all these deaths they produce and finance through Frontex and army at the doors of Europe, on the way to Germany and within Germany. They are so comfortable externalising the dirty work in other countries and selling their border-technologies, let’s remind them what their governement organizes to stop poeple from crossing borders today.

Their borders kill now more than ever!

Let’s bring Germany back to reality and spoil their self-lying party!

Solidarity with refugees and migrants in Europe and Germany ! 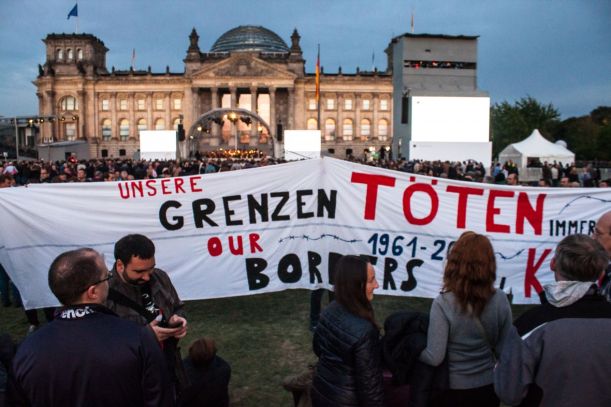 Leipzig and Vienna showed us how to do it – in Berlin we want to follow their example. Together with many international friends, comrades and other people we will help refugees to cross the borders. Instead of only watching, we want to practically support the refugee struggles on the European borders by organizing shuttle service.

While still talking of welcoming culture, the closure of the border was already being prepared. The armed federal police closed the border in Bavaria while the humanitarian catastrophe in the border areas of Serbia and Croatia, in the camps of Hungary and along the transit routes intensified. This closed border policy inside the Fortress Europe will not stop anyone from fleeing, but will lead to even more misery, fear and death. In this moment, it becomes obvious that the warm words of welcome of these last days were of little value. Therefore, our answer can only be practical help to cross the borders!

International call and overview over the convoys from different cities, you will find here: Facebook

END_OF_DOCUMENT_TOKEN_TO_BE_REPLACED 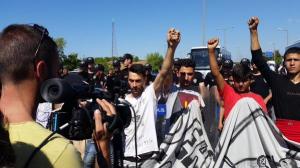 Since 5 days in Edirne, Turkey, around 3000 thousands migrants (mostly syrians but also aghanis, irakis and others) gathered, following a call started on a Facebook page (“Crossing no more”), to ask for the turkish-greek border to be opened for them. They refuse to risk their lives in Aegean sea anymore to reach a european country where they’ll finally be safe, get basic human rights and have a chance to make a life for themselves. People started to move to Edirne last weekend (around the 10th of September) but very quickly the main bus station of Istanbul (Bayrampaşa) where they were all buying tickets and getting on the buses got blocked for them. The police detains them in the bus station itself, preventing them to buy tickets to Edirne. The government declared that now the migrants have to stay in the city where they had been registered on turkish territory. Which means that it’s now officially illegal for them to move inside the country, especially to Edirne. Currently, hundreds of people are blocked in Bayrampaşa otogar in Istanbul. About 1500 people who could make it to Edirne were blocked as well in Edirne
bus station while other 1500 people were in Edirne itself, splited in two groups in different places of the city, waiting for the others to join them and start to walk to the border according to their initial plan.

“The Administrative Court of Berlin has temporarily prohibited the eviction of the refugees occupying the Gerhart-Hauptmann School. According to the decision, the State of Berlin – represented by the district office of Friedrichshain-Kreuzberg – has been denied an eviction by an interim order until a final decision has been reached in the case. END_OF_DOCUMENT_TOKEN_TO_BE_REPLACED