On the occasion of the Global Day Against Racism, the self-organized Refugee Club Impulse (RCI) invites you to the Carnival Al-Lajiìn_Al-Lajiàat, the Carnival of the Refugees, on 20th March 2016 in Berlin. The Carnival wants to raise voices against the isolation of refugees and make clear political demands against the tightening of asylum laws and the discrimination of refugees. On this day, refugees will demonstrate in the streets of Berlin and use art as a tool to highlight their issues and demands.

END_OF_DOCUMENT_TOKEN_TO_BE_REPLACED

Credit is due to Alle bleiben 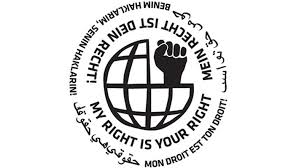 All Theaters in Campaign decided to support the project ‘’Carnival Al-Ladji’in’’ which is started by self-organized Refugee Club Impulse-RCI. Basic idea of Carnival is to break the isolation in Refugee Homes and give the awareness of their rights. We want to give a strong sign with all our demands about the current situation of refugees and against the tightening of the asylum laws in Germany. We will use Art as a tool to fight against Racism and bring our problems in streets. On 20th March Refugees will also join the demonstration together with citizens.

To organize this demonstration we will meet on 9th December at 18:30Hrs in Podewil (Kloster Straße 68). Please join us to share your great ideas for demonstration. We will make different working groups so we could work as a good team and have good coordination for everything. Please spread this message around and invite, so we could reach to maximum peoples who are refugees, who work with Refugees / for Refugees. 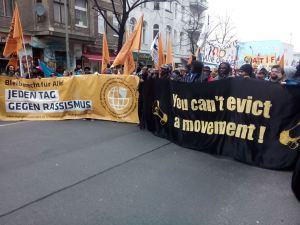 The aim is to organize a gathering in front of the LAGESO as a central place, where Refugees first arrive in Berlin, register and thereby start their existence as Refugees.

For every simple thing Refugees have to visit the LAGESO. So since weeks the Reality in front of the LAGESO is an “emergency situation”. Hundreds of people are going every day to this place. There are people who stay there for more than 3 weeks and waiting for further process.

We want to make the movement My right is your right visible not only to confront the state official’s at LAGESO and raise publicity with our existence, critique and requests – but also give a sign to the newcomers: They have rights, we are not in line with recent political decisions cutting the right to ask for asylum, with the unacceptable conditions of overloaded refugee housing, with new border controls and fences – short: with what they try to sell as a “solution” of the refugee crisis. END_OF_DOCUMENT_TOKEN_TO_BE_REPLACED

On saturday thousends of people came to the demonstration “My Right is Your Right” at the global day against racism.
Right Is Your Right! is a campaign comprised of creative artists, activists, lawyers, refugees, church officials, unionists, clubs, neighborhood initiatives, and individuals.What connects them all is the wish for a stronger political intervention in Berliner refugee policies, in a union of various forces. For collectively initiate a political change.

Meeting point was Spreewaldplatz, were people gave speeches, performed and sang. Among others the theater group JugendtheaterBüro from Moabit made an action to make racism more visible on the streets by using a huge stamp saying »Name it Racism«.

Two hours before there was an other action from Türkische Bund Berlin- Brandenburg (TBB) at Kotti and other places in the city. “5 to 12” is emphasising on the urgency about getting loud and fight against racism after an other year of a high increasing of racist and anti- muslim propaganda and attacks.

Press Conference for the Campaign and Demonstration

The campaign My Right Is Your Right! invites you

in coordination with the International Day against Racism.

For more than two years now refugees and supporters in Berlin have been publicly and visibly fighting against the institutional racism in Germany and Europe, to which so many people are permanently subject in their daily lives. The acute and concrete demands of the refugees are the complete abolition of the Residenzpflicht,a stop to placing people in the Lagers as well as all deportations, and a right to remain, education, working possibilities and to live where one wishes – thus an end to the politically supported isolation of refugees. The campaign as well as the demonstration are directed against these racist practices and will bring the long-term demands of the refugees further into the public realm.

My Right Is Your Right! is a campaign comprised of refugees, creative artists, activists, lawyers, church officials, unionists, clubs and neighborhood initiatives that have now joined together to form a network.  What connects us all is the wish for a stronger political intervention in Berliner refugee policies. We are opening the doors of theaters and other public places for the request for more just policies with regards to refugees. Our demands are not new, rather they are the ones refugees in Germany have already been demanding for decades. For us, this is neither about charity or humanitarian aid. We are not only demanding changes from policy makers, but we want to fight daily racism and exclusion. Our goal is to establish a long-term infrastructure that deals with and works against forms of daily and structural racism. Hence the campaign offers an exchange of a variety of projects and offers: work, education, sleeping places, language courses and donations as well as performances and actions.

END_OF_DOCUMENT_TOKEN_TO_BE_REPLACED

The My Right is Your Right alliance has started it’s web page. Click on the emblem at the left to have a look. Refugees, various cultural institutions, legal professionists, engaged citizens and others have formed this alliance to campaign for refugee’s civil rights in Berlin. Currently a demonstration on 21st of March is beeing prepared.

We see this weekend as one first step to develope common strategies in a growing movement.

We invite you to take part in all three days to make a process possible!

The meeting will be in english and there will be translation into french, farsi, urdu, arabic, turkish, german…

The protest against the racist migration and asylum system in Germany and Europe is getting stronger and more visible every day. The selforganized protest of non-citizens, refugees and migrants of the last two years can no longer be ignored.

As a reaction to the events of the last weeks, many people have started to organize and express solidarity, so right now a lot of people are fighting.  They are fighting in different struggles and with different strategies. This has a lot of potential, but sometimes this can also lead to conflicts.

As we are all fighting against existing conditions we want to fight this fight together!
We have a big common aim: The same rights for everybody!
This is why we are inviting you to our weekend in order to develop strategies and perspectives, to connect existing struggles and to make them stronger!

15th – 17th of August
friday 6pm: Introduction and presentation of the already struggeling groups in Berlin
saturday: Develope common strategies to fight toegether in differnet struggles for one solution for all.
sunday: Put it into practice!