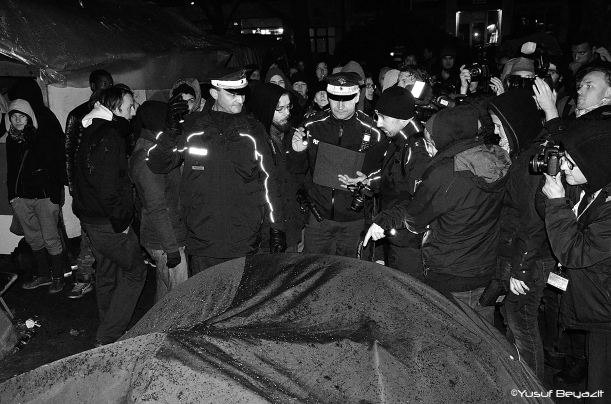 Yesterday in the early evening the refugee camp was almost evicted by the police. The district mayor – Monika Herman/Greens – has ended the official tolerance of the protest camp and has asked the police for help with the eviction. Through a massive mobilization and a solidary crowd on the square, an eviction could be prevented for the moment. The district and the police say that the eviction will take place neither this night nor tomorrow early morning. But we cannot rely on that! It is clear that the camp is not protected anymore by the district and that the mayor is ready to destroy it. For questions and protest you can reach her directly: 0176/32376947. It is also clear that the camp is a disturbance to the government of Berlin. Even if the district will not proceed to evict it, the mayor of Berlin could do it instead. END_OF_DOCUMENT_TOKEN_TO_BE_REPLACED