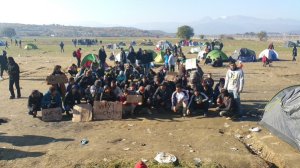 Protest at Idomeni, people are shouting “Open the Border”

After more than 3 weeks of refusing to move from the Idomeni border (Greek-Macedonian), the police force has started to forcibly evict the protesters forcibly sending them to Greek cities such as Athens and Thessaloniki (source: http://livetickereidomeni.bordermonitoring.eu/2015/12/09/9-12-2015/). As a reminder, these are mostly the people who do not come from Syria, Irak and Afganistan and three weeks ago the EU with the cooperation with its potential member states closed its borders under the pretense of everybody else being an ‘economic migrant’. END_OF_DOCUMENT_TOKEN_TO_BE_REPLACED