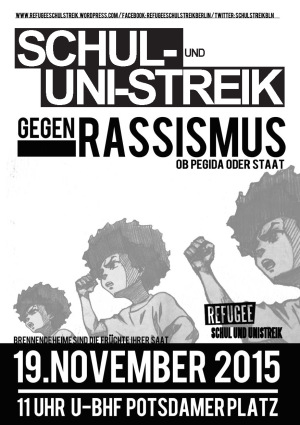 School- and University strike against racism

JOIN THE REFUGEE SCHOOL- AND UNIVERSITY STRIKE:
BERLIN: Thursday the 19th of November at 11:00 //Potsdamer Platz

on thursday the 19th of November at 11am at Potsdamer Platz, we will realize the fourth Refugee School and University strike against racism and for fundamental rights for everybody.

This message is an invitation for you: Be part of the strike and give your political demands visibility and a strong voice on the streets of Berlin. It would be wonderful if you could join the strike and if you feel like supporting the strike and it’s demands besides your overall valuable participation, there are many ways to do so, like for example: END_OF_DOCUMENT_TOKEN_TO_BE_REPLACED

The tighteneing of the asylum law will be adopted this week in Bundestag. There will be actions nationwide. 1st and 2nd of July in Berlin!
Die Aslyrechtsverschäfung soll diese Woche im Bundestag verabschiedet
werden. Bundesweit wird es Aktionen geben. 1. und 2. Juli in Berlin!

END_OF_DOCUMENT_TOKEN_TO_BE_REPLACED

On May 21st, the “International Day without Papers,” migrants, activists and supporters met in Warsaw to protest against the European border policy, and in particular its military wing, the so-called security agency FRONTEX, based in the Polish capital, during its 10th anniversary celebrations.

The demonstration was part of the Anti Frontex Days where activists met already days before for an exchange, to prepare actions and information material for a strong demonstration to protest, but also to raise political awareness. 200 people carried out a strong and colorful protest starting from the Technical University “Politechnika”, passing a police station, the representative office of the EU as to finally handover a birthday present to FRONTEX in front of their headquarter. With banners, leaflets, performances and multilingual speeches the demonstration was able to reach a lot of public interest about EU migration policy and its deadly effects.

END_OF_DOCUMENT_TOKEN_TO_BE_REPLACED

Greetings from the Anti Frontex Days in Warsaw/Poland ! Today’s demonstration is organised by different international groups and activists. If you want to see in live pictures and demo of our protest actions here In Poland, see all here, start from 5 pm.

In solidarity with all protest demos against frontex in Brussels, Paris, Rome, and also in Morroco…

END_OF_DOCUMENT_TOKEN_TO_BE_REPLACED

“We are still here”

We want to carry the ark into the city and bring our protest to the streets of Berlin.

END_OF_DOCUMENT_TOKEN_TO_BE_REPLACED

Organize – against racism and social exclusion!

The city belongs to all of us!

Everyone in Berlin creates the city as we know it. Every day we shape and build our homes, our streets, our neighborhoods. Everyone in her or his own way. As everywhere in Berlin neighborhoods are transforming – including the Wedding. These changes are associated with numerous problems. Mainly because a few want to earn of what all are creating together. Homes are being sold or renovated, rents are increasing. If accommodations can no longer be afforded you have to move in outer districts or in the worst case, your flat will be evicted. The Senate of Berlin is looking on passively. Or it supports such processes as appreciation of  so called ‘problem neighborhoods’. Quartiersmanagements (‘neighborhood managements’) and neighborhood committees support the displacements and processes of gentrification with an illusion that all citizens could take part in shaping the  policy of the city. But we do not accept this. What we create together, can be defend together – throughout an organizing from below.

Most refugees are excluded from a freedom of movement, social participation and attending a wage labor, as they are put down as “illegal” and being held isolated in camps. They are confronted physically and psychologically more directly with a forfeited right of self-determination. Economic businesses and social service providers already hit profits with escape and migration. In a smugly way, European policy creates a top-down “welcome culture”. In reality the immigration authorities and the public cost / benefit analysis on the “immigration status” decides who is allowed to stay or will be deported. Everyday racist police controls and the ever-present threat of deportation increase the pressure on refugees additionally. This is part of a racist propaganda which ultimately splits, humiliates and kills.

END_OF_DOCUMENT_TOKEN_TO_BE_REPLACED

Manifestation on 25th April, 6:00pm at Kirchplatz, Münsterstraße in Dortmund 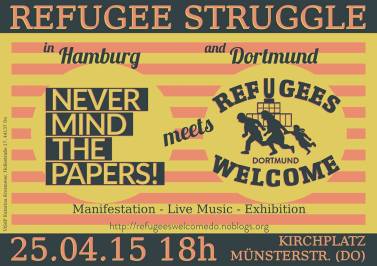 All over Germany refugees self-organize to protest against the the unacceptabilities of the migration and asylum regime. They fight for their right to stay, for freedom of movement and equal rights. Central themes like the insupportable conditions in refugee camps or the experiences of social exclusion and racism -which they experience every day on the streets and with the authorities- are made to the subject of discussion.  Therefore the restrictive asylum and resident policies get into focus. In doing so they get support by antiracist activists and groups, which declare their solidarity with the demands of refugees and see the necessitiy of joint fights, and unite to form local alliances.

For two years the group “Lampedusa in Hamburg” fights for the right to stay for refugees, which came from Lampedusa over Italy to Germany, and the approval of their italian papers and work permits. They self-organize in the local alliance of „Rights to the city – Never mind the papers“, which fights for freedom of movement, self-determination, living space and against racism. In january the alliance organized a demonstration with up to 8.000 people.

Also in Dortmund there are first approaches of selforganizing refugees. In the beginning of 2015 refugees from the camp in the Brügmannhallen delivered an open letter to the city of Dortmund, to call attention to the bad conditions in the camp. They claimed the closure of the camp. Although it is closed by now, the accommodation in emergency shelters like container villages on the outskirts of Dortmund still continues. Some of the refugees found an apartment, but there is more to it – it’s about the right to stay, to live a self-determined life without harassment, discrimination, casualization, oppression and the constant fear of deportation!

Together we want to take the struggles and fights of refugees into public and set a counter-position to the racist developments in Germany. We invite refugees and activists from Hamburg and Dortmund to talk about their experiences of their fights for the right to stay and a self-determined life. The protests need a broad support, if we want to oppose the grueling asylum policy. An active solidarity with refugees and the perspective of political organization and fighting together can be the only respond to racist diatribes from neonazis, so called enraged citizen and racists. Wether in Dortmund, Hamburg or elsewere – we will never stop resisting!

Come to the manifestation on 25th April, 6:00pm at Kirchplatz, Münsterstraße in Dortmund. There will be speeches from refugees and supporters, videos of the fights for the right to stay in Hamburg, a photo exhibition, live music and many more!

END_OF_DOCUMENT_TOKEN_TO_BE_REPLACED

While we await any attempt to force us into imprisonment as we excise civil disobedience against Apartheid “Residenzpflicht”, we shall embark on a Tour all over Germany to damask the repressive policies against Refugees in Germany.

The Tour will serve as a platform for exchange amongst Refugees with a critical view to the 2015 deceptive Asylum “relief” in comprehensive relation to the horrific Asylum “Compromise” of 1993 up to the hypocritical decision of the German Federal Constitutional Court in 2012.

In this tour, refugees will be informed about the “Adverse faces of Germany” enforced through arbitrary powers at different levels, the system of Refugee Isolation and control, the continuous exploitation of Refugees here and beyond the borders of Europe. Their propaganda is built on the grounds of ignorance of a “civilized” society and at the expense of Refugee’s human dignity.

Now is the time to mobilize Refugee’s solidarity and empower networking within our communities through the intimate understanding that we all face the same problems – even though the situations might appear to be different.

Our experiences have confirmed that nothing good can be expected from Imperialist States like Germany except by direct confrontation and scandal.

As your responsibility to support the revolution of the oppressed you should mobilize refugees and organize discussion events in your region. Announce your dates so as to enable us plan our schedule. We will be glad to join you for exchange.

END_OF_DOCUMENT_TOKEN_TO_BE_REPLACED

My Tweets
News of Berlin Refugee Movement – from inside
Blog at WordPress.com.