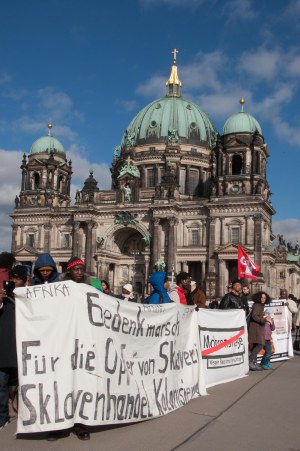 The Ninth Annual Memorial March in remembrance of the African victims of enslavement took place in Berlin on 28 February. It was the 130th Anniversary of the “Berlin Conference”, where European colonial powers negotiated the division of Africa amongst themselves producing the horrors of genocide, slavery and exploitation. Refugees, joined with African civil rights organizations and trade unionists from the GEW to protest continued racism. Among the demands were renaming of “Mohrenstrasse”, for an African Memorial, and the end of the Humboldt-Forum project which plans to display treasures stolen by German imperialists from colonies in Africa and beyond.