END_OF_DOCUMENT_TOKEN_TO_BE_REPLACED

English: Our video report about security checkpoint in Chemnitz (Saxony) which Non-citizens have to pass through it.
END_OF_DOCUMENT_TOKEN_TO_BE_REPLACED

We women from the International Women Space won’t accept to be used by the AFD, Pegida, Bärgida, Bürgerwehr or by any other white supremacist troop of racists!

The recent incidents in Köln during the new years’ eve are unacceptable. Women were sexually assaulted. The police watched and did nothing. Refugees or foreigners in general are being blamed for it as if in Germany there were no previous cases of sexualized violence against women, as if german men were harmless beings. Now take the way refugee women are living in the Lagers and see how much attention the same media, the same authorities give when there is a report of abuse. This is a clear case of explicit racism. White men can get away with the same crimes the men who acted in Köln are being accused of. Refugee women can be – and they are – harassed daily in the Notunterkünfte, Lager and the Patriarchy responds to it with a heavy silence. It makes no sense at all to make a big case out of what happened in Köln and other german cities when the reasons behind such a commotion are nothing but racist propaganda against refugees. No women will be ever safe in a society, which selects cases to be concerned with. All women must feel safe or no one is.

There is much being spoken about integration, but the discussion is still permeated by racism and sexism. If we follow how the debate about what happened in Köln is being conducted, we see that there is no mention of the sexualized violence women of colour or the refugee women are going through. It is as if these women don’t deserve the same or any attention the white women victims deserve. So, we want to remind the public that when refugee women live in houses where they cannot even lock their rooms from inside, when they are living in small towns, being the stranger in the village, vulnerable to racist abuses and attacks, they are potential victims of sexualized violence. We must unite against the right wing extremist demagogic speech. It is outrageous to see men with a carrier in propagating hate now offering themselves as defenders of women’s rights. To see politians from all parties considering closing borders and some openly advocating faster deportations in the name of protecting women is at least disgraceful.

We say: not in our name!

END_OF_DOCUMENT_TOKEN_TO_BE_REPLACED

Protest against deportation in Erfurt

On the 16th December between 4 p.m. and 5:30 p.m. 20 people protested against yet another mass deportation from Thuring in Magdeburger Allee in Erfurt. Once again several families from Serbia and Croatia have been deported. The protesters started a sit-in in order to prevent the departure of a police vehicle, in which a family that was meant to be deported to Serbia was sitting.

The blockade failed because it was violently disbanded by the police.Therefore, the deportation could not be stopped, but the protesters voiced their critisism and their anger via banners and chants. In particular they demanded a right to stay for Romani people.

More than 90% of the refugees from the so-called „safe countries of origin“ in South-Eastern Europe belong to the minority of the Romani people. There they are heavily discriminated against, a fact that the German state does not recognize to be a valid reason to flee. Although their existence is threatened in these countries, they were yet again forcefully deported by the German police today. END_OF_DOCUMENT_TOKEN_TO_BE_REPLACED

END_OF_DOCUMENT_TOKEN_TO_BE_REPLACED 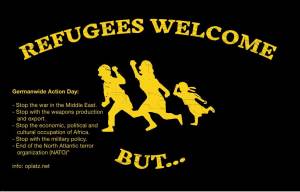 In this thought provoking essay Adam Bahar outlines the death of the ‘welcoming culture’ for refugees in Germany.  He demonstrates how Germany has been directly responsible for supporting several  dictators in the global South and how the Federal Republic is responsible for continuing to impose borders….

The article is part of series abut the refugees issue some activists from different countries involved in writing.You can view all the contributions written in arabic and translated in english for the Series here

Adam Bahar is a political activist from Sudan, currently living in exile in Germany and fighting in the refugee movement in Berlin, Germany and Europe. 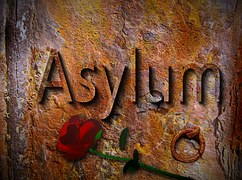 My Tweets
News of Berlin Refugee Movement – from inside
Blog at WordPress.com.