In the last week, since the Hungary closed its borders, Slovenia became the ‘new hotspot’ for the so called Balkan route, where people, who traveled from Serbia or Croatia to Hungary, were forced to change their direction of traveling to their desired situations.

In the last post we talked about the hypocrisy of the seeming humanitarian and ‘open’ Western European countries, since in the recent political assemblies at the European Commission it is becoming apparent that the EU is trying to hold people at its external borders or just let inside the desired amount of people, whether those needed for the labor markets or ”those who really need the international protection”.

Last Wednesday the Slovenian government met at the emergency assembly to discous how to ‘deal’ with the influx of people. After just 5 hours of intensive assembly they decided to change the countrie’s Defense law, a law which is valid for situations if the nation is attacked by the other nation(s), with which they will give the Slovenian army more power in the current situation. What does that concretly mean: the General assembly and government of Slovenia gave the Slovenian army authorizations to use measures similar to those of the Slovenian police. By Slovenian Constitution, police force and army are strictly separated state organs, where army only has powers to use force for external affair, such as defense of the country from the other nation. The logistic help from the army, however, was allowed even before.

The new law was analyzed by several Slovenian critical media (Radio Študent, Mladina etc.), as well as the legal organ of the Slovenian General Assemby, and it is extremely poorly written and biased. There are no clear definitions what kind of authorizations will the army get. The law states that the army will now have the power to control the flows of people, as well as stop them and detain people, which is a part of ‘wider protection of the National border‘. The document also doesn’t states if the army will be armed at the border and what kind of coercive means can be used.

Since by Slovenian legal framework it takes one week that a such a law becomes officially valid, it will become clear today if this will be so. If the new law will start to be valid every new authorization for the army will have to be accepted by majority of votes in the Slovenia’s General Assembly (2/3). Currently some intiatives are collecting votes for the Referendum against the changes in the Defense law and they have to collect 2500 votes until today.

The most worrying thing is the bluring of the lines of authorizations between the police and army and understanding the influx of people entering the country as a ‘external threat’.

Slovenia government is not invoking the mini state of exception by its own will, but it is a direct response to the recent European Union’s immigration policies, meant to demolish the movement of refugees and migrants. What is a state of exception other than express adoption and modification of the current laws and the usage of the most repressive state coercive apparatuses to deal with the countries internal affairs? It is not just Slovenia, lets take also Germany for example, which is planning to use army planes for deportations, without early notification of who will be deported from the country. But it is not just Slovenia and Germany, but it is the whole European Union that invoked the state of exception. 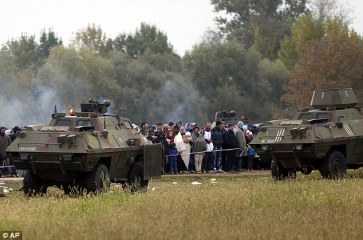 The leaders in the high EU institutions are now praising themselves that the new Eropeanwide laws will provide more effective coridors for desired destinations and destribute more financial aid for building the refugee camps and logistics. The activists from the borders are saying how this really looks in practice: the self-organised groups of activists and volunteers, who viewed the whole situation as a political issue of the EU’s immigration and asylum system, neocolonialism and capitalism in general, are saying that it is becoming impossible to cooperate and help the incoming people, as the whole ‘official coridors’ are becoming extremly formal.

It is true that people are now processed and registered more efficently, as well there is a quicker cooperation between transport services which take people between different points, but these are ‘official’ national and mainstream media informations about the Croatian-Slovenian borders. There are major downsides to such ‘good news’, quoting the Anti-Racist Front Without Borders:

‘What we are perceiving in our day to day engagements on the border is that the attitude of the Slovenian authorities leads to the dehumanization of refugees and migrants and turns this route into a total institution whose aim is to isolate refugees and migrants from the broader society and subject them to procedures of policing, selection and deportation. We also perceive that activities of solidarity by independent volunteers are more and more restricted by authorities.’

More and more, under the language of hygene standards etc., the self-organized activists and volunteers are prevented to help the people with warm food, where the latter are freezing in the cold rainy nights. But also the access to the latter is becoming increasingly impossible, meaning, besides the inability for a pragmatic help with clothing and warm food, this prevents mutual political actions which would address the discriminative immigration system, opening the borders and the reasons why people try to come to the EU for a better life in the first place. Rather than involving everyone in the political fight to build a common world for everybody, the EU’s selective mechanisms are destroying the border struggles, under the pretence of security and not enough space for everyone.

But be warned, the state of exception is not just for those, who ‘do not fit the correct citizenship’, but it will involve all future anti-capitalist, anti-establishment political-social struggles in the EU.

That is why Anti-Racist Front Without Borders  is organizing a manifestation in Ljubljana on Saturday 31 of October, 11am and calling everyone to participate in a transnational meeting and manifestation against the militarization of Slovenian borders and the attempts of the EU to break the movement of refugees and migrants. After the manifestation in Ljubljana, we will go together to the border as international independent volunteers to express solidarity with refugees and migrants and to build another, open Europe together.

One thought on “Reestablishing state of exception in the EU and a call for international meeting, manifestation and solidarity action in Slovenia”