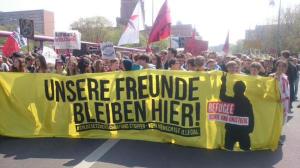 today thousands of students demonstrated in Berlin against the ongoing  destruction of asylum laws in Germany and the drowning of thousands of refugees organized by EU’s elites. Our friends stay here! was the main slogan of a demonstration directed against a new flaw of germany’s diemockracy currently beeing grinded out at parliament. The new legislation would give  ample margin for germany’s state executives to decide upon the incarceration of non EU Citizens and ultimately their deportation …. today thousands of students took to the street in protest against the targetting of refugees by increasingly oppressive bureaucracies in Germany and the EU.