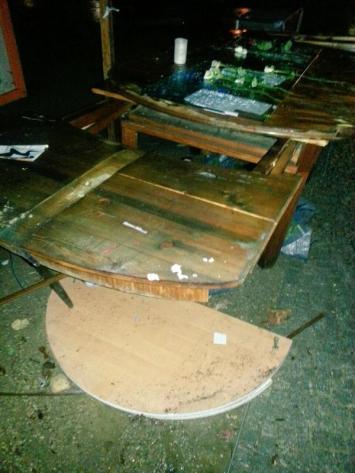 Today (18.12.2014) around 5pm the info table in Oranienplatz got attacked by unknown (most probably Nazi) people. They turn down the table and broke it, with other stuff that was next to it. Police did not provide any protection for the place. some hours later they attempt to burn down Rauchhaus, the oldest projecthaus in kreuzberg. Nazis attacking Kreuzberg just in the middle of the day.

This is happening while yesterday around 20 refugee activists which lived in the ohlauer school before eviction, has got evicted from their place at spandau in a massive police operation. Police gave the people two addresses and said that they can get a place to stay at this two organizations, one in Boddinstr, and one in Friedrichshain. but both organizations completely denied to provide any help to the refugee activists. This action of the city made these 20 activist homeless.

Last week police attacked the school, without any noticed, under the claim of “fire protection control” , and arrested 3 people, which are still in prison.

Before that the refugee activists tent got burned in Hanover.

what is going to happen next?